In Europe, the Word ‘Migrant’ Is Not the Problem 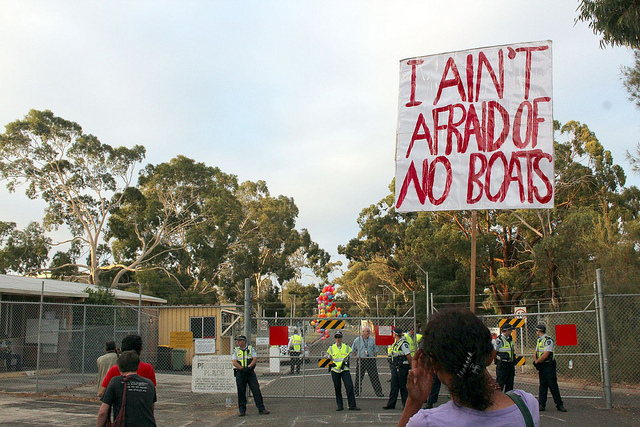 Refugees are in vogue. As callous as that may sound, the group’s plight – or more accurately, their “flight” – no matter where in the world they come from, is receiving more international media attention than ever before. This is a good thing, if it eventually leads to long term solutions and holistic international migration policies. But if the current international response is any indication, singling out refugees from other groups of people who relocate is slamming doors shut instead of paving paths towards safety and security.

Al Jazeera English made an announcement on their blog last week explaining why the news organization will replace the word “migrant” with “refugee,” when discussing the Mediterranean crisis. The goal is to give a voice to individuals affected by displacement with more accurate language: “The umbrella term migrant…has evolved from its dictionary definitions into a tool that dehumanizes and distances, a blunt pejorative,” Barry Malone wrote.

While the effort is rooted in admirable, humanitarian intentions, the push to refer to all relocating individuals as “refugees” instead of the seemingly-neutral umbrella term “migrant” is misguided and inaccurate.

The migrant label is indeed oversimplified and inadequate as a catch-all term to explain all motivations and patterns of movement. It is also true that the term undermines the gravity of the crisis, since the majority of people relocating are escaping war – including Syrians, Afghan people, Iraqis, Libyans, and Eritreans. In August, the International Organization for Migration (IOM) reported that over 2,000 people died this year trying to cross the Mediterranean Sea to Europe.

But the refugee term is not much better and in fact, might be more harmful to both groups. Relying on the distinction between the two polarizing categories is causing a negative backlash from countries dealing with an influx of both migrants and refugees.

Under international law, there is a legal obligation to provide protection and take in people fleeing persecution and life-threatening conditions in their home countries. Refugees benefit from such a categorization because they are forced into their pattern of movement, but migrants are perceived as people searching for better social and economic opportunities. As such, they are not eligible for the same benefits as refugees.

But people do not fall neatly into the categories of “refugee” or “migrant,” “forced” or “voluntary.” People move based on diverse and converging factors that often combine economic opportunity and political motivations.

When the word “refugee” is used or implied, the U.S. and European Union countries tend to recoil and respond with defensive measures. The legal obligations to provide sanctuary often causes the closure of legal migration routes. And disentangling migrants from refugees is a cumbersome legal process that many countries of arrival do not have the resources to execute. It is easier to shut down legal paths and keep all people out then determine eligibility among “mixed flows” of people.

In Macedonia, for instance, police violence against asylum-seekers at the country’s southern border with Greece is under investigation by Human Rights Watch. The country declared a state of emergency at both its southern and northern borders and have rolled out barbed wire fences to prevent people from entering.

Meanwhile, Hungary is rushing to complete the first phase of a controversial fence along its Serbian border. Hungary marks the beginning of the EU’s passport-free Schengen zone, and as the influx of people increases, fences are built to stop the flow into Europe. Officials hope to reduce illegal entries into the country by 85 percent with the six-foot razor wire fence.

The refugee label also has negative social consequences. The term evokes sympathy and portrays people as victims of circumstances out of their control. From the perspective of an arrival country’s population, as is the case in much of Europe, it follows that this group of people is likely to become a public charge. Economic migrants on the other hand, are viewed as people who could potentially contribute to society with their skills and motivations to work. Although racial and ethnic stereotypes often intensify reactions, migrants are perceived to be more of a nuisance while refugees, a burden.

Anti-refugee sentiment is growing in Europe and becoming a violent movement separate from the usual anti-immigrant rhetoric. Recent clashes between protesters and police outside a refugee shelter in Dresden, Germany – the EU’s largest recipient of refugees – illustrates this point. Two hundred right-wing activists threw fireworks and bottles at police and shouted “Heil Hitler.” Earlier in August, there was an arson attack on a building in Reichertshofen, Germany which was scheduled to house dozens of asylum-seekers mostly from Syria and Iraq. Arson attacks have been common with 202 registered attacks on Germany’s shelters in 2015 alone.

Sealing borders with fences, building walls, and setting fire to buildings reserved for asylum-seekers are societal and governmental reactions to the perceived social dependency and colossal resource needs of incoming refugees, not the economic potential of migrants. The fear-based hysteria is an irrational response to the high number of people crossing into Europe; and the word “refugee” provokes a knee-jerk reaction. Projected numbers indicate that the situation will get worse: Up to 3,000 people are expected to cross into Macedonia every day in the coming months. Germany is estimating that it will receive 800,000 asylum-seekers by the end of the year.

There is nothing inherently wrong with either migrant or refugee labels, but the media has placed too much emphasis on the legal and social distinctions between them. The reverse terminology trend of using a catch-all refugee description just highlights a population’s vulnerability and is not an efficient way to ensure aid. The focus should instead be on the set of criteria that, if met, qualifies an individual for asylum, regardless of one’s label. We can start by underscoring humanized commonalities between all groups – migrants and refugees are all people in search of a better life.