Fences, Walls, Mass Deportations: More of the Same from the Second GOP Debate

The most pervasive takeaway from last night’s Republican debate was that nearly nothing is considered unfit for political discourse. The shocking and the illogical are the new norms for the GOP. We had Donald Trump, in response to a pejorative comment he made in recent weeks about Carly Fiorina’s appearance, calling Ms. Fiorina a beautiful woman with a beautiful face. In the middle of a nationally-televised presidential debate, a personal conversation between Jeb Bush and Trump took place about whether or not Mr. Bush’s wife deserved a personal apology from the latter. Two inexplicable attempts on the part of “The Donald” to high-five (low-five?) both Ben Carson and Jeb Bush also occurred.

The only surprise was that sensationalism still dominates the GOP’s campaign trail dialogue. When the conversation turned to the topic of immigration, it became abundantly clear that even the most middle-of-the-road messages from nearly all candidates are veering to the extreme.

The dialogue on immigration by Republicans has become homogenous, and deals only with enforcement, militarization, and security. The candidates voiced their opinions on the difficulty level of deporting 11.3 million undocumented migrants; they exchanged ideas as to what type of wall should be built along the Mexican border; and finally, some substantial time was spent on discussing who should be awarded credit for starting the conversation about the massive “illegal immigration problem,” and when.

“Amnesty” has always been a bad word for the right, but at this point, even mere mention of something immigration-related — that is not immediately followed up with a cry of “Boots on the ground!” or the condemnation of sanctuary cities — gets derisively lambasted. Ben Carson, for example, was discussing his asinine plan to allow undocumented workers with clean records – apparently without regard to their work or education history – to become guest workers in the agricultural sector instead of deporting them. There are many things wrong with this proposal; most notably, the exceptional arrogance and ignorance required to homogenize all undocumented immigrants as one mass of migrant farm workers. However, no flaws of the plan were discussed on the debate stage, save for one facet: Carson was immediately accused of being in favor of amnesty, an “immigrant lover.”

The single moment of sanity came when Carly Fiorina dismissed the proposed alteration of the Constitution to undermine birthright citizenship as pandering on the part of Donald Trump.“The truth is you can’t just wave your hand and say the 14th Amendment is going to go away,” she said. But generally, the overarching theme was that compassion for undocumented immigrant families equates to being soft on security, and that any deviation from that message will not hurt a candidate in the polls.

In the Ronald Reagan Presidential Library, in front of the Air Force One in which President Reagan used to travel, the candidates stood on stage, hawkishly and flippantly discussing the mass deportation of millions of people and the destruction of well-established and hard-working families.Indeed, Reagan invocation was the currency of the debate, as it has been for the GOP for many years. 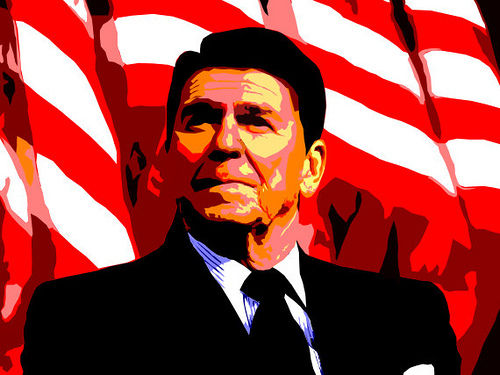 On this night, however, the candidates were RRINO – Reagan Republicans in Name Only. About amnesty toward immigrants, Reagan once said: “I believe in the idea of amnesty for those who have put down roots and who have lived here even though sometime back they may have entered illegally.” Indeed, about unauthorized immigration, Reagan had opinions that run contrary to many of his would-be contemporaries: “Are great numbers of our unemployed really victims of the illegal alien invasion or are those illegal tourists actually doing work our own people won’t do? One thing is certain in this hungry world; no regulation or law should be allowed if it results in crops rotting in the field for lack of harvesters.”

As was exemplified in their feverish attempts to emulate their patron saint, the immigration-related rhetoric remained empty, and unilaterally focused on security, border sealing and militarization. If the candidates could in fact truly imitate Ronald Reagan, and avoid kowtowing to the anti-immigrant, xenophobic zeal that has thus far characterized this election season, perhaps a useful conversation about immigration policy could materialize. Unfortunately, fear of a potential poll blowback will keep GOP candidates from ever appearing “soft” on immigration; consequently,it seems unlikely that substantive immigration reform will be discussed anywhere near the campaign trail.

The Usual Caveats Apply: Amendments to the Visa Waiver Program
26 Jan 2016
Out of the Closet and Out of the Shadows
29 Jul 2015
Asylum and Withholding of Removal Report:  New BIA Decisions on “Particular Social Group” Claims
21 Feb 2014