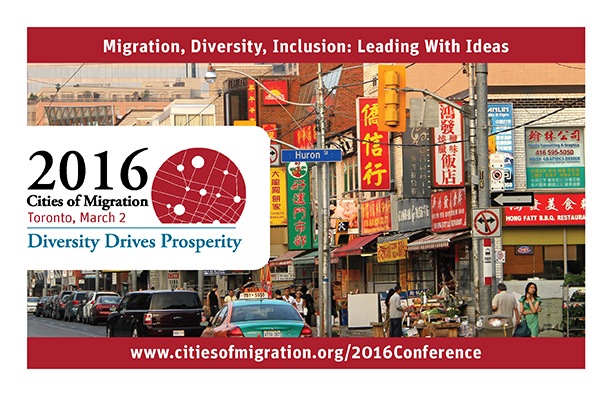 Last week we attended the 3rd Annual Cities of Migration conference in Toronto, Canada. As immigration professionals in greater-Detroit, we already knew that diversity drives prosperity – the theme of this year’s conference – but it was interesting to get a more international perspective on the economic and social benefits of improved integration.

Did you know that more than 50 percent of the population in Toronto is foreign born?

The conference kicked off with a keynote address by Toronto mayor John Tory, who said that while the city has been welcoming to immigrants, newcomers are still marginalized in Canada. Fascinating discussions ensued on how cities worldwide can overcome these thorny challenges. Panels ranged in content and representatives from civil society organizations in Canada, Turkey, Germany, and the U.S. to an ambassador of the UN International Organization of Migration (IOM). The dissimilarity between American and Canadian approaches to migration became clearer as the day progressed, especially with regards to refugee resettlement initiatives, political strategies regarding integration, and the contrasting sentiments among the two countries’ populations towards immigrants in general.

What is the DNA of a Welcoming City?

Diversity & social innovation can drive the entrepreneurial spirit of the new global economy. And medium-smaller businesses could leverage immigrant diasporas to increase social and economic change in cities. According to Wendy Cukier, the Vice President of Research & Innovation at Ryerson University, the discourse on migration has shifted. Over the long term, immigrant entrepreneurs will continue to be successful but big corporations need to start programs that bring immigrants into the fold as well.

City leaders from Toronto, Vancouver, Germany, and New York weighed in on how diversity challenges shape the urban economy. The commissioner of the Mayor’s Office of Immigrant Affairs in New York City Nisha Agarwal spoke about how cities can take the initiative and serve the needs of undocumented immigrants. She mentioned a municipal ID program that New York City launched last year (FYI the Detroit Mayor’s Office of Immigrant Affairs visited NYC recently to take notes about this program with the hopes of implementing it here). The role of cities as actors and activists is an important one and nationwide efforts are trying to counter the toxic narrative surrounding immigrants – many mayor’s offices have submitted joint Supreme Court amicus briefs on the immigration reform case.

As one panelist, Meir Siemiatycki of Ryerson University, put it: “the city should be a place of shared and equal belonging, regardless of where you are from.” Civic leaders all agreed that cities can advance equitable diversity: The first step is to remove barriers at the top and create enhanced opportunities for diverse populations. The second step takes place at city and community levels, where inclusion and depolarization must occur.

Business leaders from Canada and the American Midwest discussed links between workforce diversity, market opportunity and the impact of innovation, products, services, and processes. Mary Stagman of Cincinnati, Ohio and the VP of Regional Initiatives of Agenda 360, spoke about the increase in migration to Midwest states: “Big cities like New York are getting too crowded. The bottom line imperative is to figure out what we can do collectively as a region to implement change. We should be diverse and inclusive.”

Employers are in the habit of waiting for organizations to prepare immigrants for jobs, but they need to take more of an active role in educating and building up a network to help bring more people to gainful employment. The Midwest, when compared to Canada, is lacking in this regard. Mary Stagaman: “There needs to be a pipeline for talent; not a transactional agreement but a continuum effort everyone needs to be involved in.”

Jill Helke, the director of International Cooperation and Partnerships of the International Organization of Migration discussed the symbiotic relationship between migrants and urban centers — migrants shape cities and their lives are shaped by the cities they live in. In order to manage migration governance, Helke said, cities must create jobs and other opportunities at the local level. International conflicts and climate change are changing the population flow and creating new challenges for local authorities in providing social services.

On an international level, IOM plays the role of expert in guiding cities to create well-managed urban migration policies. This includes helping mayors redesign cities in normal times and in times of crises. And they work in conjunction with the UN Refugee Agency (UNHCR): “We don’t decide who is a refugee, but we do practical things, like health assessments, planning, and transportation logistics.”

With it’s integration of Syrian refugees, Helke mentioned Toronto and Gaziantep, Turkey as cities worthy of praise for their positive policies. Gaziantep has established a comprehensive program without undermining the well-being of host communities. The city has adapted to the immediate and long-term needs of migrants, including the protection of specifically vulnerable groups, education services, local health services, and specific assistance for children in need to psychosocial support and vaccinations.

Helke reiterated that migration can be a driver of a city’s growth: “Integration is not an abstract process reduced to the fulfillment of administrative duties, but a people process. This must be the point of view of migrants and of the local community. If integration fails, there will be costs on all sides.”

With IOM’s guidance, Canada was successfully able to resettle 25,000 Syrians by February 2016. How did they do it? Helke joked: “Of course, we were lucky that February had 29 days this year;” but a similar initiative would be nearly impossible in Detroit or any other U.S. city – why is that?

The political climate in Canada is friendlier and more open to creating change than the security-driven approach in the U.S. Prime Minister Justin Trudeau’s attitude to refugees is changing the narrative, Wendy Cukier said. “The Canadian government had no clue how to integrate 25,000 refugees but they consulted with experts and realized it was a reasonable way to challenge the status quo,” she further explained.

But it’s not just the Canadian government, civil society also plays a big role. Samantha Jackson of Toronto’s Lifeline Syria spoke about a university-driven response to the refugee crisis. Canada allows private refugee sponsorship and this combined with student efforts merged into a team-based model. Local efforts and have successfully resettled 15 families since October 2015.

Did you know that refugees must pay IOM back for their flight once they are resettled in their new countries?

Of course there are challenges, such as societal resistance, islamophobia, and bureaucracy shortcomings. But Lifeline is trying to solidify an adaptive model that can be implemented anywhere. In the U.S., private refugee sponsorship is not an option – so there are additional economic hurdles to overcome. From 1987 to 1995, the State Department authorized the private sector to pay for the processing, travel, medical, and resettlement costs for Cuban refugees and started a pilot program in 1990 for the resettlement of Soviet Jews through two nonprofit organizations. The initiatives were very successful, but since then, the U.S. model only allows private donations to be made to non-government groups working with authorities to host refugees.

Rachel Peric of Welcoming America tried to explain that integrative initiatives for immigrants do exist in the U.S. despite the heated political cycle. Welcoming Michigan, for example, is doing its part locally with resettlement programs and advocacy efforts. The goal is to work at the community level to get everyone socially comfortable with newcomers and to help newcomers feel less out of place.

In Canada, identity is a more fluid construct, unlike in Germany, where immigrants have a harder time integrating. “We develop identities where we live – institutions and the people around you shape identities,” says Audrey Singer, a senior fellow at the Brookings Metropolitan Policy Program. To have healthy cities, we need to have flexible policies that bring in workers on multiple skill levels. Regional stakeholders and institutions play an important role in integration policies.

To conclude the day’s events, the Honourable John McCallum, Canada’s Minister of Immigration, Refugees and Citizenship, had a candid conversation with Ratna Omidvar, the executive director of Global Diversity Exchange. McCallum explained that Canada has the political will to accept more refugees, but this needs to be balanced with the needs of the population. He also cited Germany’s Chancellor Angela Merkel as his heroine, when it comes to refugee and immigration policies. Watch their whole conversation here.