A Political Power Play: Are Immigrants Being Taken for a Ride?

Last November, President Obama began a political firestorm when he announced a new executive order for immigration reform. In many ways this was a follow-up to the two-year-old program known as DACA, which covered young undocumented immigrants who were brought to the U.S. as children and grew up in this country. The one unveiled in November, DAPA, applies to all undocumented immigrants who arrived before 2010, committed no serious offenses, and have children who are U.S. citizens or lawful residents.

While most legal scholars maintain that the president acted within his legal authority, his political opponents in the Republican Party thought otherwise and began a well-organized campaign to derail DAPA. A legal armada was assembled by the 26 Republican-dominated states to undertake a direct attack on the president’s program. They went judge shopping and successfully located a federal judge in Texas, Andrew Hanen, who had already taken public stands against the president’s new immigration measures. When a lawsuit was filed in his court, Judge Hanen obliged Republicans by issuing a temporary injunction which had the effect of putting the brakes on DAPA. 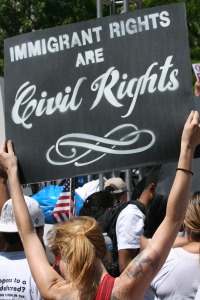 The President’s legal team challenged the injunction in the 5th Circuit Court of Appeals, but lo and behold, they upheld the Texas judge’s injunction with a 2-to-1 vote. Politics was the deciding factor, yet again: the two who voted to uphold the injunction were appointed by a Republican president, the third by a Democrat.

Last week, officials from the Justice Department said that the government will stop trying to overturn the temporary injunction and push for permission to carry it out immediately. Instead, they decided to wait and fight the lawsuit and make what they believe will be a stronger legal argument on the merits of the president’s immigration program.

Once again, the courts have been infected by politics and the political struggle will continue until the Supreme Court has the last word, probably not until mid-2016, months before Obama’s presidential term expires.

The uncertainties created by these developments will have consequences for millions of undocumented people and their families and the continuing debate will assure immigration issues will remain at or near the top of this country’s political agenda. Individuals and families struggling to survive and build a better life for themselves and their children will feel the brunt of these events. Moreover, DAPA and DACA will likely become a major part of the debate between the two presidential candidates in the 2016 election.

The impact of this political standoff has the potential to signal changes of historic proportions. But politics aside, undocumented immigrants might become too nervous to reveal themselves before they know who the next president will be. Millions of lives, and the very character of this country as a land of immigrants, is at stake.

As immigration professionals, we’ll keep fighting for their dreams because it is what brought us and our ancestors to this country in the first place. Our fight is theirs; their dream is ours, too. We will continue to advocate on their behalf and against this political drama that leaves the entire country at an economic, social, and moral loss.

The Immigration System in the Context of the COVID-19 Pandemic
7 May 2020
No Comments
Immigration Reform Update
20 Nov 2014
SCOTUS Decision & Immigration (In)action: A Political Failure From Start to Finish
23 Jun 2016