My grandfather, Louis Glasser, came to this country in 1906 through Ellis Island when he was six years old. One of his sisters traveling with him had very dark-colored, almost black, eyes. At that time, the authorities were afraid of people with glaucoma coming into the country. She did not have glaucoma or any eye disease, but the doctor on Ellis Island wrote a giant “E” in chalk on the back of her coat. That meant she had a suspicious eye situation and required further checking (An “H” in chalk meant a hearing detainer). The family waited anxiously on Ellis Island for several additional days, but, thankfully, my great-aunt Minnie was finally released and permitted to enter the U.S. with her family.

My grandfather and all of his siblings eventually opened yarn stores in each borough of New York City, and negotiated buying wool and yarn together to get a better price from suppliers. 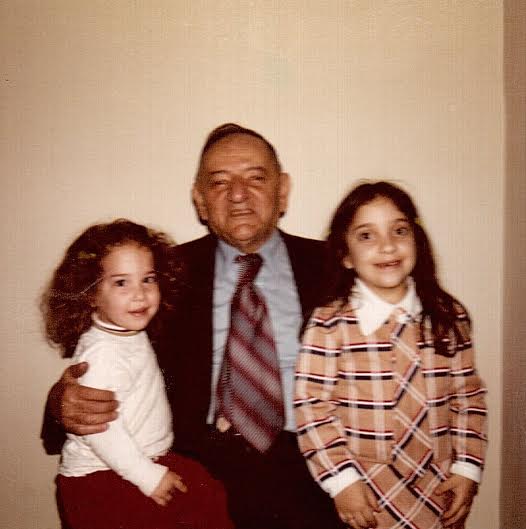 1973: Maris on the right with her grandfather and sister Diane on the left.

My great-grandfather, Joshua Glasser, came through a few years before my Grandpa Louis and the rest of his family. He was turned back and refused admittance at Ellis Island but to this day, no one knows why. The European shipping company was required to pay return ship fare back to Europe for anyone not accepted at Ellis Island. Not wanting to pay his return fare, the shipping company advised my great-grandfather to try to enter the U.S. through Canada. At the Canadian border, his luck turned around and the authorities accepted him!

I am grateful that my family was admitted to this wonderful country. I am even more grateful that the internet was not invented one hundred years ago when my great-grandfather was trying to enter at different ports of entry!