In Review: Fifty Years of the Immigration and Naturalization Act of 1965 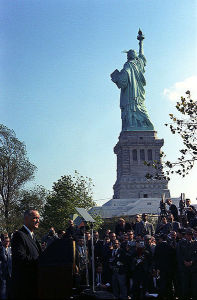 President Johnson in front of the Statue of Liberty. (photo courtesy of LBJ Presidential Library)

In 1965, Congress passed the Immigration and Naturalization Act of 1965, which ushered in a new era for newcomers to enter the United States. Motivated by a new national consciousness brought about by the Civil Rights Movement, the Act replaced the quota system which had been in place since the 1920s, and had been seen by many as discriminatory and racist. The old method placed numerical limits on immigrants admitted from each country, and heavily favored western and northern European nations over persons from Eastern Europe and the Pacific Islands. It allowed virtually no immigration from Asia. To illustrate the renewed commitment to the American Dream, President Lyndon Johnson signed the Act into law at the base of the Statue of Liberty on October 3, 1965.

The new Act replaced the quota system with a set of standards that evaluated prospective arrivals individually and considered their education, vocational skills, political refugee status and existing family connections with relatives in the United States.

At the time of the Act’s passage, its congressional sponsors (Representative Emanuel Celler of New York and Senator Philip Hart of Michigan, as well as Senator Ted Kennedy of Massachusetts) explained that its implementation would have little effect on the demographic makeup of the nation, which turned out to be highly inaccurate. According to the U.S. Census Bureau the percentage of ethnic and racial minorities increased considerably in subsequent years, from 25 percent of the population in 1990 to 30 percent in 2000 to 36.6 percent in 2010.

But what is especially interesting are the American public’s attitudes on the law and towards immigration in general—both then and now.

In 1965 the issue of immigration did not carry the political currency it does today. A Gallup poll taken that year found only one percent of Americans viewed immigration as a pressing political matter. There was also little partisan division on the issue—the Act garnered a solid majority of votes from both major parties. Seventy percent of Americans favored the new law in 1965, due largely to its emphasis on individual skills and family connections, which seemed more grounded in common sense than the old system. This high level of tolerance may be due to the small presence of immigrants in the nation at that time. According to the Pew Center, only five percent of Americans were foreign born in 1960.

Yet as America grew more diverse, new stress points emerged. According to the Pew Center, by the 1990s large numbers of Americans, “saw immigrants as burdens on society rather than as strengthening the country through their hard work. Also, many thought that the growing number of newcomers would threaten traditional American values and customs.” But just as our nation’s official policies evolved, so has our national mood. According to Pew, their data also points out that, “by 2014, a healthy 57 percent majority had come to the opposite point of view, saying that immigrants strengthened the country through their hard work; and just 35 percent now say that the increasing number of immigrants is threatening American values.”