Since becoming an UN recognized memorial day in 2005, January 27th has marked International Holocaust Remembrance Day. A day to commemorate the genocide of 6 million European Jews by the Nazis during World War II. The date of January 27th was chosen because it was the day Auschwitz-Birkenau, the largest of the Nazi concentration camps, was liberated by the Red Army in 1945. While many in the United States learn about the horrific details of the Holocaust and the methods that the Nazis deployed, the plight of Jewish refugees who tried to escape persecution is sometimes overlooked. 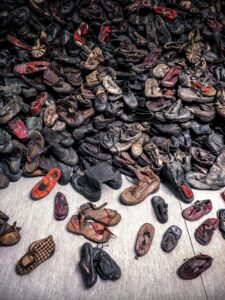 The shoes of Holocaust victims

Sadly, one factor that prevented European Jews from escaping Nazi persecution was immigration policies in the U.S. and other nations. Jewish Refugees faced enormous obstacles in finding asylum during the Great Depression and later World War II. After the Nazi party began aggressively targeting Jews in the late 1930s, countries in western Europe and the Americas feared an influx of Jewish refugees. About 85,000 Jewish refugees (out of 120,000 Jewish emigrants) reached the United States between March 1938 and September 1939, but this level of immigration was sadly far below the number seeking refuge. In the years before World War II hundreds of thousands of Jewish applicants lined up outside US consulates all over Europe hoping to obtain a visa under the existing immigration quotas. By June 1939, the number of applicants had increased to over 300,000. However, most visa applicants were unsuccessful.

The search for refuge began years before the Holocaust and finished years after.  On International Holocaust Remembrance Day, it is important to remember why the United States welcomes refugees. To help victims of ethnic persecution, war, genocide, famine, and other disasters. Modern refugee policy must change. Helping refugees must become a moral imperative once again and the Holocaust and its atrocities should always serve a reminder to that.

Immigration Reform in Detroit & Our Clients
16 Sep 2015
Reform, Not Fingerprinting Parents, Would Ensure the Safety of Child Refugees
6 May 2016
Rules Change for Vulnerable Asylum Seekers who Remain in Mexico
14 May 2020
No Comments