Another Thick Green Line: Militarization and Our Borders

The level of security along the nation’s borders often escapes public awareness. The reason? Ordinary Americans seldom take notice and undocumented immigrants are usually too scared or intimidated to raise the issue. Fortunately, however, the media has stumbled upon a shocking new reality.

In a recent article in Mother Jones, “The US-Mexico Border: Where the Constitution Goes to Die,” independent journalist Todd Miler reports that since 9/11, the newly created Department of Homeland Security has steadily ramped up both the degree and intensity of all law enforcement even tangentially related to border security. According to Miller, this escalation has resulted in a new host of abuses. High tech cameras and motion detectors scan virtually every inch of real estate–even far away from crossings. At checkpoints miles from the actual border, agents stop all motorists and ask deeply probing questions. Protests are responded to with harsh treatment, including potential arrest and intimidation. Miller gives one example of an agent emptying a woman’s purse and stomping on its contents, including family photographs. 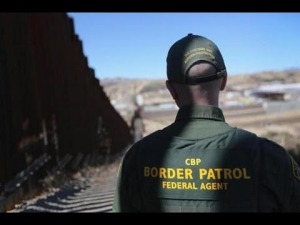 The new, stronger emphasis on domestic safety has attracted the attention of military contractors.   Miller notes that, “military manufacturers, eyeing a market in an ‘unprecedented boom period,’ are repurposing their wartime technologies for the Homeland Security mission. This “bring the battlefield to the border” posture has created an unprecedented enforcement, incarceration, and expulsion machine aimed at the foreign-born (or often simply foreign-looking).”

Miller also makes an even more shocking reference—something the ACLU refers to as the 100 mile thick “constitution free zone.” Although the ACLU concedes that the term is being used allegorically, in a fact sheet report on its website, the organization makes reference to a an obscure federal law that allows CBP agents to conduct warrantless searches on any type of vehicle (auto, train, aircrafts, etc.) within 100 miles of the country’s actual frontier. Such a wide swath takes in almost a full two thirds of the nation’s population.

The English scholar Lord Acton one famously said, “Power corrupts, and absolute power corrupts absolutely.” The security of our nation’s borders is, without question, a modern necessity—but does this require us to forfeit our most cherished constitutional liberties, especially the fourth amendment? Has our government simply gone too far on this matter? As citizens, it is our task to remain vigilant