A Holiday By Immigrants: Columbus Day

Since 1792, Americans have celebrated Columbus Day in one form or another. The now federally recognized holiday marks Christopher Columbus’s first voyage to the New World in 1492. Many Americans view this day as just that, a holiday to recognize the accomplishments of a man who ushered in the age of exploration while laying the foundation of our modern and globalized society.

In the past decade, the debate over the holiday and its significance in American society has only grown more intense. You may have heard of the campaign to rename Columbus Day “Indigenous People’s Day.” Advocates for the renaming argue that the holiday completely overlooks the native peoples who already were inhabiting the Americas thousands of years before Columbus’s arrival. They also point out that it celebrates a man who wasn’t very nice, to say the least, and caused many problems for the native peoples, among other things. Above all, advocates say, Columbus Day isn’t really about Columbus himself. In fact, more and more Americans are discovering that Columbus Day as a holiday is more about immigrants in America. Specifically, how Italian-American immigrants created the holiday in order to change American society’s perception of themselves. 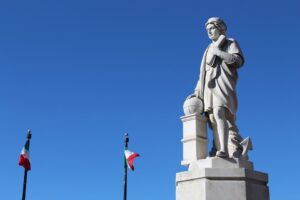 A statute of Christopher Columbus

The United States has a long and troubled history of discrimination against immigrant groups. Irish, Jewish, Chinese, Japanese, and others, were ethnically discriminated against and, during several periods of American history, actively prevented from immigrating to the country. The situation was no different for Italian immigrants who first began arriving on American shores in big numbers around the late 1800s. These immigrants were always seen as outsiders. However, around the early 20th century, Italian-Americans began embracing Christopher Columbus as a way to escape discrimination and show that they too belonged in land of opportunity. Columbus had been an icon in American culture since the country’s founding, cities and streets all across the nation are named after him. So, Italian-Americans started promoting themselves and Columbus as an icon of Italian culture.

As the influence of Italian-Americans in American society grew, President Franklin Delano Roosevelt designated Columbus Day a national holiday in 1934. Ultimately, Columbus Day is a holiday to mark contributions of Italians in the “discovery” of America and their attempt to be seen as a indispensable part of America, but that’s not the full story. Through the 20th century, Italian-Americans integrated into American society becoming an integral part of the American fabric and leading to the origins of the holiday to fall out of the American consciousness. Which begs the question, do we still need to celebrate Columbus Day?

Long before Italians and other immigrant groups came to the U.S., Native Americans had been facing discrimination, marginalization, and destruction of their communities and cultures for centuries. Since the Civil Rights era, Native Americans have been fighting back against prejudice and for more recognition in American society. Part of this battle has been focused on the rejection of Columbus Day. In American schools, children typically learned about Columbus Day in the context of exploration. Through books, cartoons, and educational videos, Christopher Columbus is portrayed as a brave explorer who paved the way for European colonization and proved the world was round. An inaccurate portrayal to say the least and part of a popular myth that has long since been debunked.  All the while, this curriculum has overlooked the treatment of the indigenous people who migrated to North America approximately 12,000 years before Columbus set foot there.

For Italian-Americans, Columbus Day was a day to celebrate their Italian heritage, albeit with quite the troubling figure. For today’s Native Americans, the goal of Indigenous People’s Day is the same, to help bring Native American culture into the mainstream and celebrate the rich heritage of America’s original immigrants.