A Brief History of Immigrants and Their Contributions to Detroit

Detroit has long been a destination for immigrants. Decades before the economic decay, the 2013 bankruptcy, and even prior to French colonization, various Native American  groups traded with each other and competed for resources in Southeast Michigan. There was also trade and cultural exchanges between French settlers and Native American tribes before and after the city was established in 1701 under French rule. Whether it was gifts in the form of art creations, land swaps, or other interactions, the natives and the settlers contributed to an open, amicable, tolerant, and fairly peaceful interactive society that eventually came to define the city of Detroit.

As time passed, settlers continued to arrive from other parts of Europe and Canada, and their presence created an environment of diversity, innovation, cooperation, sanctuary, and general freedom. Public buildings, museums, libraries, and theatres took root in Detroit, displaying a profound influence and intermingling of various cultural backgrounds. The influx of immigrants from Western and Eastern Europe who came to Detroit to escape political and religious persecution added to the general feeling of belonging and acceptance. Irish immigrants, for example, were fleeing  persecution and general political turbulence brought about  the British in Ireland. Many Eastern European families also looked for better economic opportunities in Detroit and later gave back to the local communities that initially took them in.

Immigrants and internal migrants alike first came to assess the region’s dynamic economic and social atmosphere before encouraging others to join them. Americans living in other parts of the country also migrated to Detroit. For example, Detroit welcomed many African Americans escaping segregation in the South and in search of job opportunities and a better life. Many found jobs in factories and within the music and education fields; however, this did not always exempt them from discriminatory practices. Many Detroit neighborhoods were guilty of prolonging the shameful practice of segregation, and new Detroiters faced difficulties in obtaining higher-paying and quality jobs. Disenfranchisement in the city eventually led to the 1968 riots, which spurred the phenomenon known as “White Flight” to the suburbs. Since then, some progress has been made, but upward mobility for African Americans remains stagnant in the city to this day. Social tension also lingers, even though development of the city’s infrastructure is on the rise.

In contrast, many of Detroit’s immigrants from other countries had various opportunities to grow and prosper. Chaldeans – Christians from the Middle East and Arabic-speaking countries – opened shops in Detroit and became entrepreneurs. To this day, this ethnic group owns many liquor stores and gas stations in the Greater Detroit area. Others worked in factories and were eventually able to build comfortable lives in the country. Muslim Arab-Americans did the same, usually beginning their careers by working in factories and automotive companies before opening up businesses of their own. Examples of successful Muslim American businesses include:  Hijabee, an apparel store selling stylish hijabs and other Islamic garments run by twenty-three-year-old Lama Habhab; Shatila, a popular bakery in Dearborn  originally founded by Raid Shatila, a Lebanese immigrant; and for authentic Middle Eastern food, numerous locations of La Marsa, Shish Kabob Express, or Sahara restaurants are scattered throughout the city. HB Salon, founded by Iraqi Chaldean Bashar Kallabat, and Ryan’s Food Market started by Raad Kathawa, are two examples of prospering Chaldean American businesses.

People from Poland were also able to professionally and socially improve their lives in Detroit. They opened businesses in Hamtramck including the restaurants Polonia, Srodek’s Campau Quality Sausage, Ivanhoe Cafe, and the Polish Village Cafe. Many Polish immigrants also worked within the Motor City’s auto-industry in factories and in copper and ore mines. Polish settlers also founded many faith-based and charitable organizations in Hamtramck.s. The Polish Sea League, for one, contributed to improving neighborhoods with charitable causes. Mexican Americans also contributed to the fabric of Detroit’s cultural and economic diversity. In Mexicantown, restaurants such as Taqueria Mi Pueblo, Los Altos, Taqueria Lupitas, Taquieria El Rey, and El Barzon are owned and operated by Mexican immigrants. All in all, immigrants from other countries established a rich, community-oriented approach for living busy but rewarding lives in Detroit. 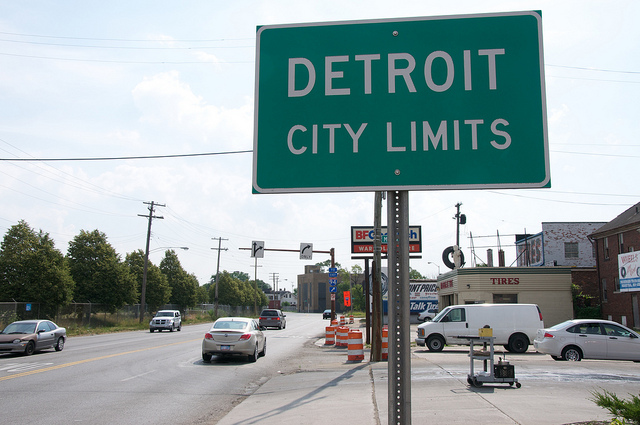 As it happens with most minority groups, individuals of varying ethnicities are unfortunately often subject to hate speech even though these stereotypes are not accurate. Undocumented and legal immigrants both have much more to lose and appreciate the opportunities that come across their paths. Despite generalizations to the contrary, they arrive on time for work, pay taxes, and obey laws when it comes to criminal acts committed within the country.  For Hispanic immigrants, ensuring that their children have a more stable and promising future is a priority and helping one another  with child-rearing and household tasks is another staple of the this community. Hispanic Detroit residents participate in community-based activism that takes  a grassroots approach to the betterment of everyday life. Non-profit and for-profit organizations, such as Casa Amiga and Centro Multicultural Law Familia in Pontiac, Latin Americans for Social and Economic Development, Harper Gratiot Multi-Service Center, and Latino Family Service in Detroit, help build a future for established residents and newcomers alike by providing literacy classes, food and utility services, childcare, and legal services. Activism for the betterment of living conditions and changing unjust laws has taken the forefront in this community. Michigan United’s immigration reform campaign and the Michigan Immigrant Rights Center (MIRC) work toward making the community more aware of their legal rights, and providing legal support to those who cannot afford it. They address DREAMERS’ rights to work permits, scholarships, promote anti-deportation policies, and better pay.

Arab immigrants have also faced harsh generalizations regarding their religion and backgrounds. Many Muslims are stereotyped or branded as “terrorists” simply because of their religious beliefs. To counter the negative images, Arab-Americans mobilize within their communities and find support systems through grassroots organizations and their diversity.

In 2011, Michigan’s branch of the American Civil Liberties Union (ACLU) defended the Koran-burning pastor, Terry Jones, in his right to freedom of speech. Jones was spouting anti-Islam rhetoric and was arrested for disturbing the peace. The deputy director of the Michigan ACLU chapter, Rana Elmir, is a Lebanese-American Dearborn native, but she still supported Mr. Jones’s right to express his views because she believed in the general right everyone has to freedom of speech and assembly. Elmir symbolizes the diversity of views that grows strong within immigrant communities, the appreciation of American values at the local  level, and a religious tolerance that characterizes many Muslims’ beliefs.

Dearborn, a city that borders Detroit proper, has a forty percent Muslim population, and Arab Americans in the Detroit area are very politically active – they serve in city council positions and other leadership positions, such as the city’s police chief. Palestinian-American Rashida Tlaib, a former member of the Michigan House of Representatives who championed the advancement of low-income families and developing before-and-after-school programs, is an example of a prominent Arab American involved in community development on a scale much larger than that of her own ethnicity and immigrant group. Dearborn is not an ordinary city, but the generalization that its ideals are  dominated by restrictive and un-American Sharia laws is unfair and untrue. Crime statistics prove that this is a fallacy: In 2013, there were 347 violent crimes in Dearborn compared to 1,204 violent crimes in Lansing, another city in Michigan with much less ethnic diversity. Dearborn encompasses  several racial groups, not just Arab Americans, coexisting and living together, including Hispanics, Whites, and African-Americans. There are also multiple religions practiced in the city. In addition, freedom of assembly is permitted and encouraged, even in front of the city council building and  the Islamic Center. The generosity and support of diverse groups helping each other is evident within immigrant communities. For example, Islamic Relief USA and the Michigan Muslim Community Council donated $100,000 to the Detroit Water Fund and the Wayne Metropolitan Community Action Agency to help all Detroiters pay their water bills. Diversity, appreciation of American values and rights, and the ability to look beyond one’s own needs define the Arab, Muslim, Hispanic, Polish, and other American immigrants in greater-Detroit communities.

What is it to be an immigrant to Detroit? To begin with, it is to play a pivotal role in the diversity and  restoration of the city as it rebounds from financial bankruptcy. Second, it is to have the opportunity to seek a better life for oneself and one’s children regardless of race, religion, or political opinion – a tradition rooted deeply in the ideals of what it means to be an American. Third, it is to stand out in one’s individual community as a contributing member of the nation as a whole. By shining bright despite stereotypes, immigrants repel anti-immigrant and anti-ethnic sentiments that only serve to  diminish all of American society.

The Usual Caveats Apply: Amendments to the Visa Waiver Program
January 26, 2016
Driver’s License Renewals During the Pandemic
May 13, 2020
Another Thick Green Line: Militarization and Our Borders
May 7, 2015