On October 29, 2015, we attended the 12th Annual Immigration Law and Policy Conference in Washington D.C. The day-long event was hosted by the Migration Policy Institute (MPI) and Catholic Legal Immigration Network, INC (CLINIC) and took place at Georgetown Law Center. It was great to spend a day with other immigration professionals, policymakers, analysts, and experts, and we got an inside look at the higher-level dialogue going on between government officials, the Department of Homeland Security (DHS), and community advocates working at the grassroots level. As immigration lawyers, we added to the dialogue in a meaningful way and learned about what’s to come. Below are a few highlights:

The Honorable Jeh Johnson, U.S. Secretary of Homeland Security was the morning keynote speaker. He began by stating that a sovereign nation must protect its borders, but building a wall on our Southern border with Mexico was not the answer. “A 10 foot wall will not deter people. Border security experts say that we need more technology and surveillance – these are smart ways to patrol the border.” 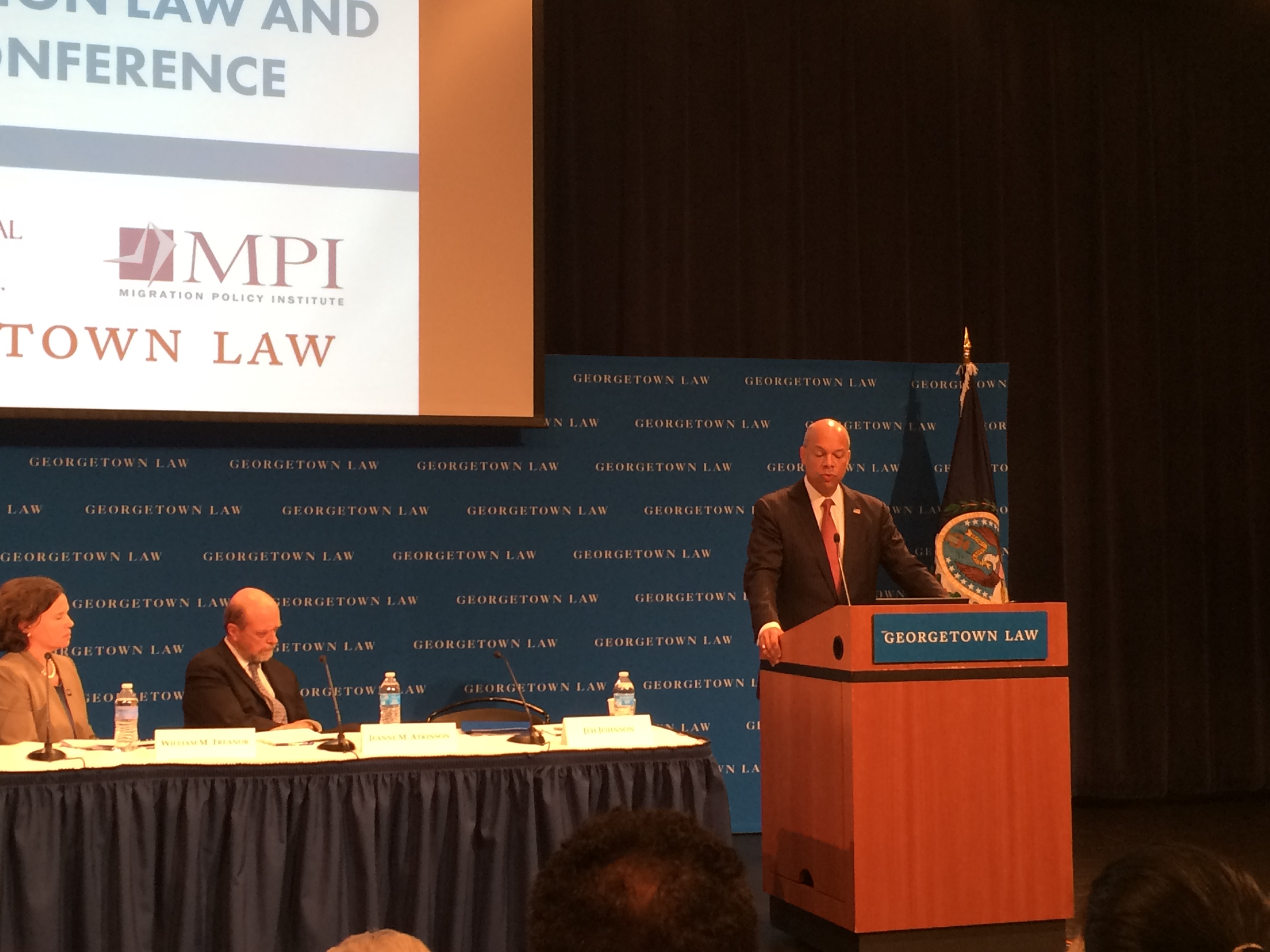 On the status of President Obama’s November 2014 executive action on immigration, Johnson noted that the President’s policy is a prioritization of resources, where felons, not families, are targeted. “The policy gives people an opportunity to come out of the shadows and be accountable,” he said. The Obama administration will continue to defend litigation and plans to implement the DAPA program: “There should be no second class citizens in the U.S. We have the authority and it is time to change the law.”

The system for vetting refugees, Johnson said, has improved but there are limitations; nonetheless, the U.S. must do its part to address the humanitarian crisis but DHS is committed to doing it carefully. “Integration is a concern, expanding good programs, and working with what Congress gives us are all factors at stake,” he added.

The conference also featured a number of panels and discussions on a myriad of topics related to immigration, the first of which was on politics and U.S. immigration policy. As the election cycle heats up, immigration has become one of the most politically pervasive topics  in recent months. The apparent lack of trust in the Latino community regarding the Obama Administration and previous administrations, was discussed at length, and included Donald Trump’s dangerous rhetoric against immigrants. The difference between comprehensive and piecemeal immigration reform was also addressed and the question posed was why the word “comprehensive” is a dirty one for Congress.

After a short break, a panel on the future of executive action took place. The topics discussed included DHS’ new priority system, which we outline in more detail in a previous blog post and includes a video of GPM’s views on on-the-ground enforcement procedures and why the priority system is not working as well in practice as it is on paper. 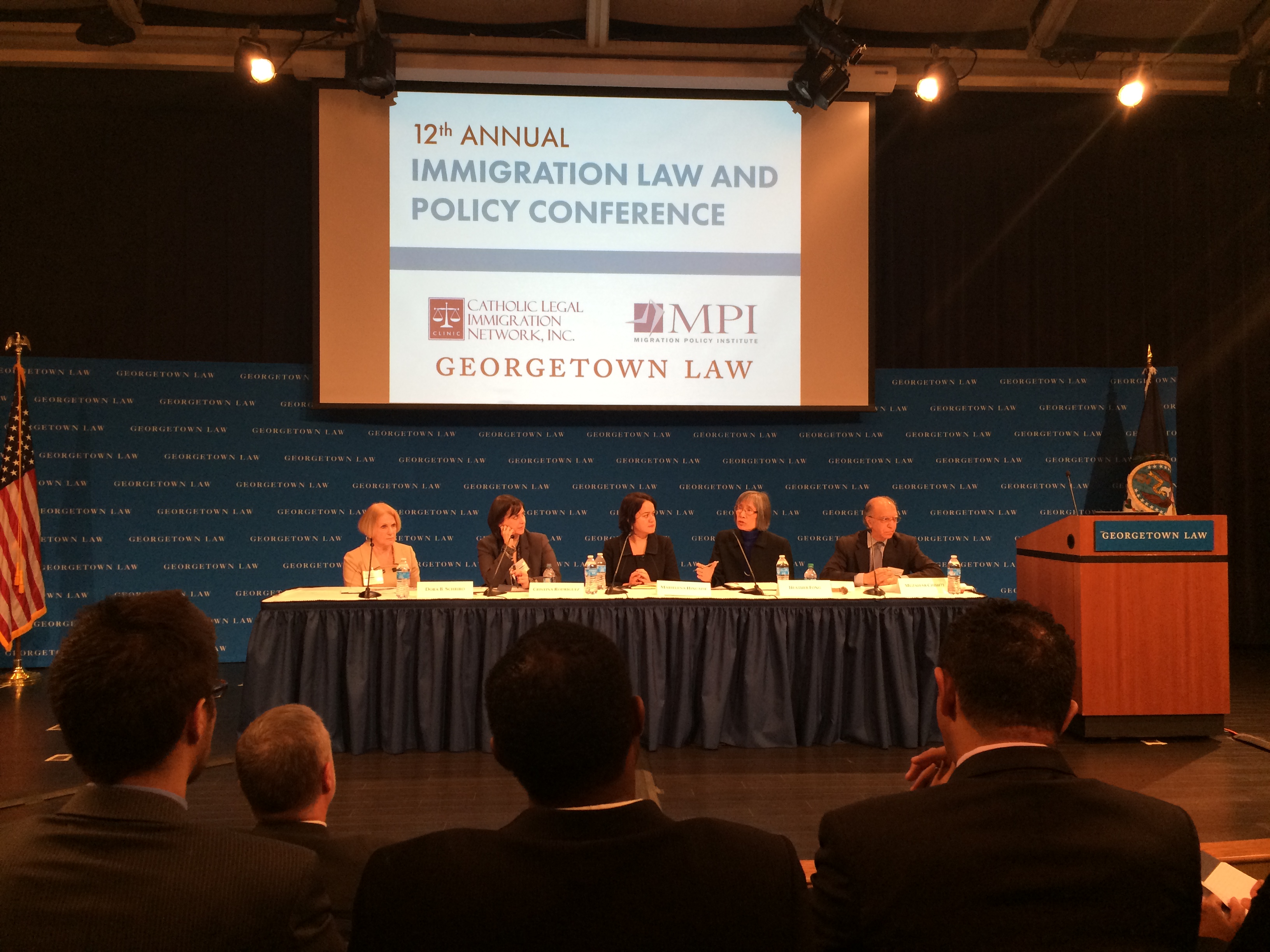 The lunchtime keynote speaker, the outgoing United Nations High Commissioner for Refugees, Antonio Guterres, initially joked that he was a little bit intimidated to be talking to a room full of lawyers. The intimidation wasn’t apparent, however, as Guterres smoothly started his talk by reiterating the goals of the UN Refugee Agency (UNHCR): to preserve asylum space, keep borders open, strengthen delivery of assistance and protection, increase funding from donor nations, and increase support for refugee hosting. In a global context, he said, the capacity to solve conflict has diminished and the humanitarian response to the increase in forced migration must be strengthened.

Guterres is strongly against changing the 1951 Convention on Refugees in any way. Even though the traditional distinctions between refugees and economic migrants – who do not fall under the legal category for protection – are being blurred, the Convention is still relevant and able to adapt to changing circumstances.

But the High Commissioner does see gaps in the way international migration is treated as a whole: “There is no multilateral approach to migration; instead it is dealt within a national sovereignty framework.” To address the gaps in the Convention, there should not be a new, legally binding instrument, according to Guterres, but international guidelines that enhance cooperation among Member States. The U.S. must play a leading role in creating and implementing such guidelines, which would lead to better coordination between countries of origin and destination, and facilitate protection to refugees via legal options. One approach that Guterres supports is to make the International Organization of Migration (IOM) a UN entity.

The problem is the national debate on migration has been hijacked by populism, which contributes to the paralysis of EU institutions to deal effectively with the current crisis, Guterres noted. As such, States are not taking responsibility for dealing with the flow of people. There must be coordination efforts between civil society and international organizations to best manage migration on a global scale. Again, Guterres stressed, the U.S. must be a leader in these efforts.

Even though the focus of his speech was on international migration, Guterres pointed out problems with the U.S. asylum system, detention policies, and legal assistance limitations in the country. The national security argument about terrorists coming into the country under the guise of refugees, which Republicans have recently relied on in the dialogue about immigration reform, was rebuffed by Guterres. “There are easier ways to get into the U.S. for terrorists then waiting 18 months for a resettlement opportunity,” he said.

Finally, the High Commissioner concluded his speech by reiterating his “fanatic” support for resettlement and called on Europe and the U.S. to use this as a strategic tool with Syrian refugees. This is a tool to make sure EU borders remain open and shows commitment that we can help Lebanon, Jordan, and Turkey: “Whatever the U.S. does defines the rules of the game. Hopefully the internal debate leads to a positive result.” 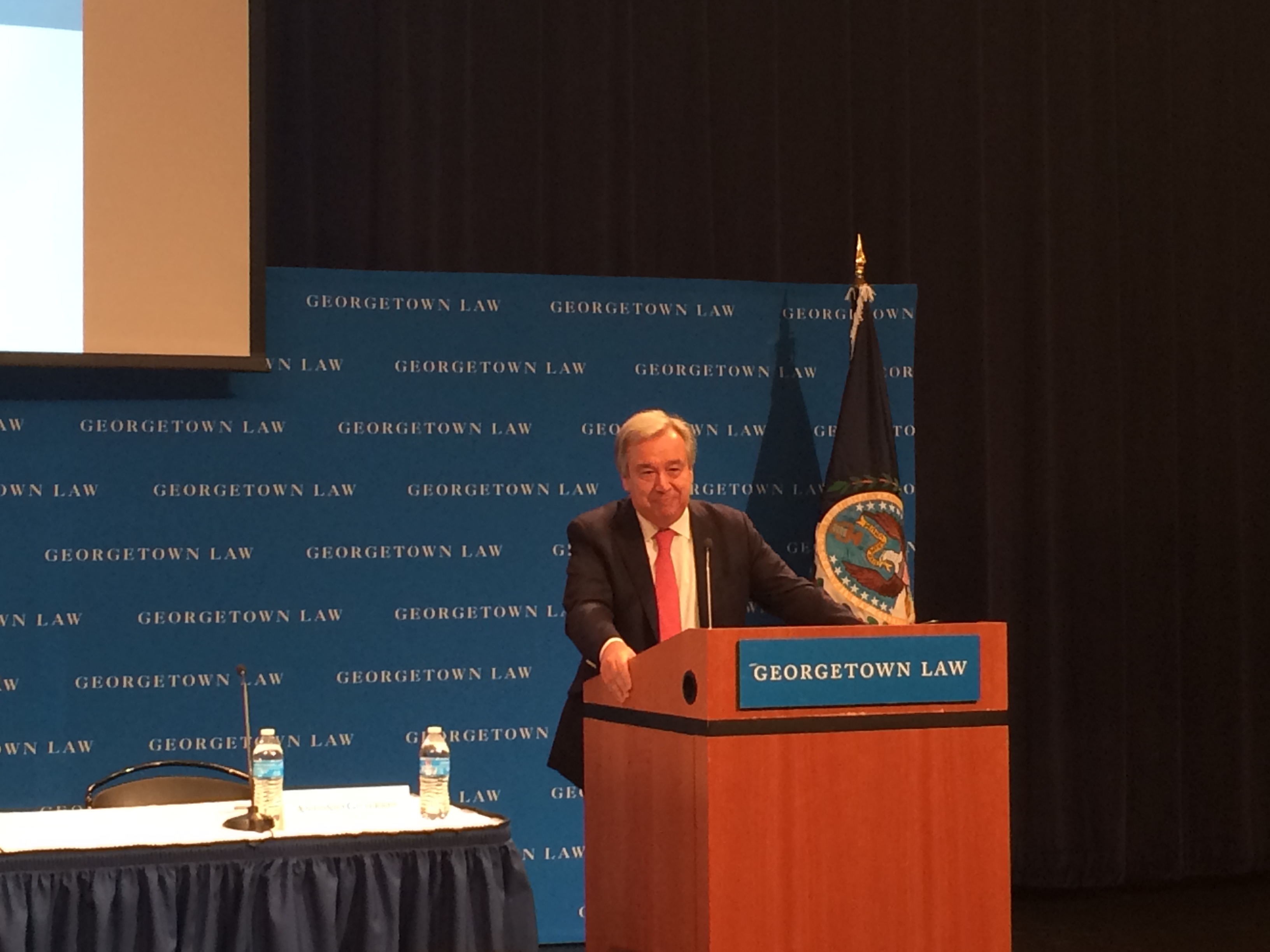 Unaccompanied Central American children was the topic of the first afternoon panel. In 2014, more than 67,000 unaccompanied minors from El Salvador, Guatemala, and Honduras arrived in the U.S. – this number accounted for the largest number of such children ever apprehended by Customs and Border Protection (CBP) in any fiscal year. The panelists addressed the changes and updates and heavily noted that the number of arrivals since 2014 has decreased. The most interesting part was the discussion on the shift from the U.S.-Mexico border to the Southern Mexico border and how the U.S. Defense Department supports Mexico with funding and equipment to stop drug trafficking and migrants from entering the country. Mexico is becoming a destination country, not just a transit one.

At the U.S. border, 40,000 children were apprehended in 2015 and this smaller number is largely due to the fact that border enforcement has been strengthened and became a priority after 2014. But instead of being treated as a refugee issue, young Central American minors are seen as a border management and enforcement issue in the U.S. immigration reform debate.

The next and final panel of the conference was related, and examining the growth of immigrant detention and the future of detention alternatives. Detention is being used as a means of deterrence to prevent refugees from seeking asylum. Moreover, increased family detention has become a very controversial consequence of the 2014 influx of Central American minors.

Bob Libal and Jonathan Ryan, the advocates on the panel, asked why the U.S. didn’t’ take a refugee resettlement model or a disaster prevention approach instead of one focused on border enforcement and detention. Private, for-profit, organizations are funding family detention centers and this matters because of the fiduciary duty to maximize profits of detention facilities.

There are alternatives to detention, and Libal noted that more access to lawyers all over the country is one such response that could replace funding for detention facilities and border enforcement. Most of the families and minors detained cannot afford legal counsel, so their chances of getting asylum are low. This feeds the perspective that these people are not refugees, when in fact they are. Detention is not a DHS issue, but a White House policy issue and the Obama Administration’s approach to immigration. “Ankle shackles are not an alternative to detention, but another form of it,” Jonathan Ryan asserted.

As the DHS representative on the panel, Esther Olavarria, Senior Counsel to Secretary Jeh Johnson, was outnumbered. But she made a very good point about how hard it is to appropriate funding from the government for more legal representation options. She called on government foundations to step up with funding. Non-governmental organizations, charities, and churches do not have many resources, but are still helping the situation. She validly deflected much of the criticism targeting DHS on to foundations and their lack of action.

The topics discussed at the Immigration Law and Policy Conference will continue to be talking points that will get more heated as the refugee crisis in Europe intensifies and the 2016 presidential election inches closer. But the important thing is to keep the dialogue going among immigrants and immigration professionals and not get too sidetracked by the partisan debate that dramatizes and polarizes. The management of immigration and migration as a whole needs to be managed by compassion, not fear.