“All persons born or naturalized in the United States, and subject to the

jurisdiction thereof, are citizens of the United States and of the State

wherein they reside. No State shall make or enforce any law which shall

abridge the privileges or immunities of citizens of the United States”

Some of the countries with restricted jus soli includes Australia, Bahrain, the Dominican Republic, Egypt, France, Greece, Ireland, Malaysia, Morocco, Spain, Sudan, Thailand and Tunisia. In these countries, citizenship generally hinges on the requirement that at least one parent, sometimes specifically the father, was born in the country and therefore has citizenship by birth. There are only two countries in which jus soli has been entirely abolished: India and Malta. In light of recent events, specifically Donald Trump’s insistence on his ability to repeal birthright citizenship, some have questioned: what are the effects of repealing the right of automatic citizenship? 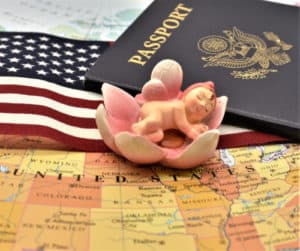 Many believe that repealing birthright citizenship would be a catch-all solution for reducing illegal immigration. However, aside from being untrue, such a repeal could have some serious unintended consequences. In an article on the subject, it is noted that “repealing birthright citizenship would create a self-perpetuating class that would be excluded from social membership for generations.” Not only would this create a trend of inequality and lack of ability to achieve upward socioeconomic mobility, but it would do absolutely nothing to resolve the illegal immigration problem.

The vast majority of migrants do not come to the United States for citizenship alone. Rather, it is opportunities for gainful employment, a better life for one’s children, and safety from violence and discrimination that drives immigration flows, both legal and illegal. In a report on the matter by the Center for American Progress, there are several complications that could arise from the removal or birthright citizenship. One enormous complication includes the need to create a costly and enormous department whose purpose would be to verify and create a registry of births and status to ensure that all children registered as citizens are deserving of such status under new guidelines.

There are over 4 million children born in the United States each year – imagine the funding, manpower and bureaucratic resources needed to create and maintain such a department. Studies have shown that our economy stands to benefit from immigrants and refugees contributing to our economic and social fabric – we are, after all, a nation of immigrants and refugees. In creating such a birth registry, we would be expending enormous amounts of money to support a system that negates the rights of a group that supports and enriches our economy – a lose-lose situation.

Another issue would be the ethnic profiling of pregnant women who would bear the brunt of such a destructive policy. In their attempts to reach the United States and assimilate, immigrant and refugee women face disproportionately higher risks as 60-80% of Central American female migrants, both women and girls, are victims of rape as they make the journey to the United States. Another major issue would be denial of healthcare once they are in the United States and profiling of pregnant women, which could be classified as a “violation of federal health privacy laws.” In a recent attempt to expose such people, “two state government workers sent the names of 1,300 people to law enforcement and the news media because they suspected them of being undocumented immigrants. The list included the due dates of pregnant women.” Women themselves, who already face higher rates of discrimination, violence, sexual assault and human trafficking in their journey towards a better life, would also be left to shoulder the burden of profiling, proving citizenship and providing for children whom the government seeks to deny.

One such country, the Dominican Republic, has enacted the very thing proposed by our current President. Previously, Haitian migrants and immigrants worked low-pay jobs in sugarcane fields and beach resorts, two major sources of income for the Dominican Republic. Discrimination against Haitian immigrants has been common since the country’s inception. In addition, poor record keeping as well as lackluster distribution of documents (birth certificates, etc.) makes it difficult for Haitians to combat inflammatory rhetoric and discrimination with legally admissible evidence. In 2015, it was ruled that, “all those who could not prove that their parents had been legal residents when they were born – going all the way back to 1929, when the “in transit” exception was added to the constitution – were not citizens.” All such persons were forced to register with the government and in the following years, some 80,000 people of Haitian descent were deported.

It is apparent that repealing birthright citizenship could have far-ranging negative consequences because it also affects those who already hold citizenship status, as a result of the status of their parents, grandparents, or even great-grandparents. Our nation stands to suffer economically and socially from such a tone-deaf repeal and we would lose the vital diversity that contributes to our economy and social fabric. We as a nation are built on our immigrant status – we are a country of immigrants and by immigrants – but lately, not for immigrants. Whether politicians like it or not, the immigrant population is not only what built our country, but what continues to replenish  a nation whose birth rates have fallen to thirty year lows. Should we choose to enact a repeal of birthright citizenship (which would require modifying or eliminating the 14th Amendment), we would not only be harming those who seek to contribute to our nation, but those who already call the United States home.