The 2020 Election: A Perspective

As is the case with most presidential elections, each of the candidates from the two major parties tend to have 40% or more of the likely voters backing them. In other words, each has close to half (and sometimes more) of the voting public in their corner.

The situation is no different with the 2020 U.S. Presidential election which is less than two weeks away. The polls show Biden ahead, but they also show more than 40% of prospective voters are in Trump’s corner. The Republicans tend to call themselves, “Conservatives.” The Democrats mostly see themselves as “Liberals.” Many voters in the middle call themselves, “Moderates.” Depending on the times, they could lean toward the Democrats or the Republicans.

In this particular election, the personalities of the two major party candidates are very distinct. You could say they are polar opposites. Consequently, passions run high on both sides, and each side issues dire warnings about what will happen if the other side’s candidate gets elected. Therefore, it is fair to ask what is really behind all this drama, all these dire warnings and all the hand wringing. 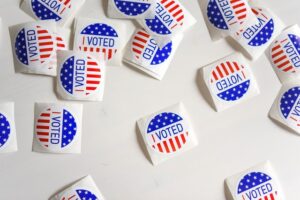 In spite of what is at stake (and there is a lot at stake), the stark and tragic reality most of us rarely contemplate, is that on the vast scale of a cosmic perspective, this election, like all others, and in fact, like all human affairs, is insignificant. Even on the historical scale if we take in the roughly 12,000 years since human beings have emerged from the wild and settled down in agricultural and nascent urban communities, this election is also hardly worthy of notice. It’s pretty much insignificant, no matter how dire the warnings of pundits and advocates on today’s political stage.
But if our attention turns to the question what is at the root of this contest, we can see it in light of what it says about human nature. One group is driven by a certain attitude and understanding of reality, the other group by another understanding and attitude.
One group sees the world primarily as a harsh place where the dog eat dog struggle for existence unfolds, where the strong  prevail, and the weak are left behind. Those sharing this perspective have little sympathy for those foolish souls who instead of fighting to prevail, are pretending to want to be do-gooders to those undeserving weaklings and laggards who would rather live off the labor and capital of the righteous.
The other group sees humanity as marching toward a better day ahead. They feel the weak need to be helped, those left behind due to whatever impediments, are entitled to a life of dignity like the rest of us. They are not necessarily in denial about all the evil in this world, but they have faith the good will win out in the end. Accordingly, they are inclined to seek harmony, and tend not to accept bleak realities as simply part and parcel of the struggle for existence. They believe we all have a share in the common good, and must fight for it.
Of course, these observations are gross simplifications. Each person has their own unique combination of attitudes and sensibilities, but I believe those are the prevailing attitudes in each camp. In some elections one side comes out on top, in other elections, it’s the other side. The struggle for balance and for an improved understanding of reality is never ending.
I for one, prefer the would be do-gooders. Each of us must choose and make our own stand, and fight for our beliefs. May the best side win!