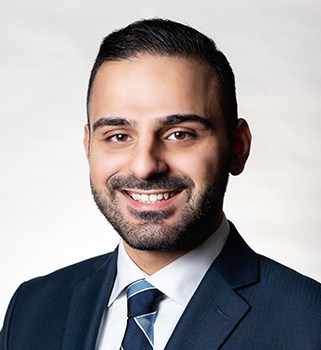 About Moses A. El-Sayed

Born to immigrant parents from Lebanon, Moses completed his Bachelor’s Degree with Distinction from the University of Michigan and later went on to receive his Juris Doctorate from Michigan State University College of Law. While in law school, he served as a Law Clerk in the Civil Rights Division of the Attorney General’s Office and participated in MSU’s Immigration Law Clinic. At the clinic, he advocated for the legal status of unaccompanied minor children, crime and trafficking victims, and persons fleeing persecution. It was during this time that Moses’ interest in immigration law developed into a passion and he decided to pursue immigration law exclusively.

Prior to joining George P. Mann & Associates, Moses began his career as a general practitioner at a small firm in Metro Detroit, where he gained experience in the courtroom as a civil litigator, divorce, and criminal defense attorney. At our firm, Moses utilizes the skills he obtained in general practice to defend clients in Immigration Court who are being threatened with removal/deportation. His advocacy has led to many of these individuals obtaining permanent residency/green cards, waivers of inadmissibility, asylum, special immigrant juvenile status, and citizenship.

Additionally, Moses’s experience in criminal and family law permits him to assist immigrants with ancillary matters that might negatively affect their immigrant status, such as those who are charged with crimes or those who risk losing their lawful status due to divorce/separation.