Hello, my name is Isaias Levi Cruz and I have begun working as a summer intern here at George P. Mann & Associates. I live in Pontiac and I am currently a student entering my fourth year at Oakland University where I am studying Political Science. I also happen to be a proud Salvadoran who tries my best to represent my nationality wherever I go. I was privileged enough to be born in this country; more specifically in New Jersey. However, my family moved to Michigan when I was three years old, so I have adopted behaviors more typical of the Midwest. 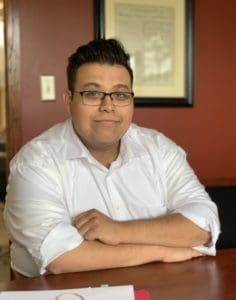 Both my parents are TPS recipients and came here from El Salvador in the nineties fleeing a brutal Civil War and the aftermath of a devastating earthquake. They met here, got married and soon afterwards, my younger brother and I were born. We moved to Michigan hoping to find better opportunities to work and it was here where I grew up. As I got older, I began to notice that my family was a bit different than other families in our neighborhood. We spoke a different language at home, ate different foods and listened to music with a different sound. I soon came to realize that my parents came from a different world and were trying to preserve our traditions and way of life alive through our experience at home. Instead of rejecting these traditions in order to become more “Americanized”, I decided to embrace them and talk about them every chance that I had. I was never ashamed to talk about my identity and it was this identity, as a child of immigrants, that led me to want to pursue a career in immigration law.

The very first time I saw an immigration lawyer was on a variety television show that aired on Saturday nights. The show featured entertaining contests with prizes and Latino artists performing live. However, it always made time to assist the community, sometimes through legal help. In one of the show’s segments, there was a part that featured a person whose family was fragmented by this country’s broken immigration system. All they wanted was to see their family members again and their story made the audience feel for this person. Then, an immigration lawyer wearing a stylish suit would come out and explain the work he had done for the family’s case. Then, miraculously, the person’s family members would come out of nowhere and surprise them. The family would be reunited right in front of the audience and the millions of viewers. When I saw this as a child, I perceived the immigration lawyer as a superhero and looked up to him. As I grew, I came to see this as a career I wanted to venture into. I wanted families like mine to succeed and live the American Dream of success. I have tried to assist the community in as many ways as I could. Translating, notarizing documents, or simply going with them to an immigration appointment. It was at a time where I was assisting a member of the community where I came across this internship.

As I was helping someone with an Affidavit of Support, I simply asked if the lawyer that was assisting us if the firm needed any interns to help them out. As someone who wants to study immigration law, I wanted to see what it was like to work in a law office that specialized in my field of interest. This led to me sending in my resume, being interviewed and eventually joining George P. Mann and Associates in the fight to help the immigrant community succeed in this country.

I share the vision of service that my coworkers have and every time I come to work, whether to file papers, translate or do other clerical tasks, I am exited knowing that I am contributing to something bigger than all of us. I hope to make the most of everything I learn here when I begin to study at law school and I aspire to assist the immigrant community with the same passion and fervor that I see in the lawyers and staff here. As I look forward to graduating college and hopefully starting law school next year, I hope I can acquire skills and experiences that can help me as a progress in my career. I know that working at this office is a step in the right direction to a bright future in this field.