Michigan has a population decline problem. The latest numbers from the U.S. Census Bureau indicate that Detroit’s population, the state’s largest city, as well as its surrounding metro area (where nearly half of the state’s residents live), continues to fall. According to recently released estimates, Detroit’s population currently stands at somewhere around 667,000 representing a decline of approximately 3,000 since the summer of 2019. Over the same period of time, the six-county Detroit metropolitan area, which holds about half of Michigan’s residents, lost an estimated 2,455 people.

For people familiar with Michigan’s struggles over the last half-century, this trend should come as no surprise. Since the 1980s, the state’s population has remained effectively flat while the populations of most other states steadily (or exponentially) climbed. The reasons for this phenomenon are no secret. Xuan Liu, director of research and data analysis for the Southeast Michigan Council of Governments, stated that, “Metro Detroit is seeing fewer immigrants, aging residents, and an increase of residents moving out of the area.” 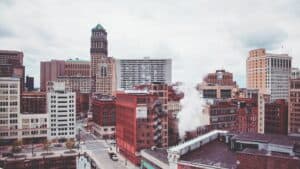 Although population decline may not appear serious, it can have negative long term consequences on a city, state, or country. One example is Michigan’s struggle to fill jobs, prior to the pandemic, in research and engineering which are desperately sought after in its automotive industry. In addition, a disproportionately large aging population can burden services like social security and shrink the tax base especially if the young labor force continues to dwindle. This in turn can force government officials to raise taxes in order to maintain basic services and balance budgets. The most extreme example is Detroit which has lost nearly two-thirds of its population since its peak in 1950 and has not been able to provide adequate education, transportation, and other social services in spite of a relatively high tax rate. Issues like these can also be seen to a lesser extent in other Midwestern cities.

However, not all hope is lost. Immigrants can make a positive difference in turning around the state’s fortunes. In fact, census reports from the last few years indicate they already have to some extent.  According to studies conducted a few years ago by the US Census Bureau, “Michigan’s immigrant population grew by an estimated 116,000 people between 2010 and 2017.  Without that increase, Michigan’s population would have shrunk by about 32,000 people during that time.” Numbers aside, immigrants are also more likely to be working age, have a graduate degree, and start businesses. All good things if the state intends to grow its economy, strengthen its social safety net, and investment in infrastructure and education.

These reforms could be accomplished through a variety of methods including crafting immigration policies to make it easier for foreign students, high skilled workers, asylum seekers and investors to stay here, work and eventually start businesses of their own. However, a more effective and politically plausible policy could be one proposed by former Presidential candidate Mike Bloomberg and others in the Democratic party which would allow, “certain localities to petition for ‘place-based’ immigrant visas to meet economic or social needs in their communities.” By tying visas to specific geographic areas, the US government could ensure that the economic benefits that immigrants bring are funneled to where they need to be. Such policies have the potential to bring working-age and motivated immigrants ready to create businesses and jobs in the process.

However, there is no silver bullet, especially when it comes to turning around a declining population. Good economic, educational, as well as transportation policies by local, state, and federal governments, can also play a big role in attracting people from around the world as well as across the nation. In 1890, the percentage of immigrants in Michigan was 26 percent which coincidentally preceded the largest economic boom the state would experience when the automotive industry took off. As of 2017, only 7 percent of Michigan residents were born outside the US well below the national average of 13.4 percent of American residents who were not U.S. citizens at birth. Although the state is not likely to see 1890s numbers anytime soon, with a new pro-immigration President, a plan to increase Michigan’s population could still be feasible.

What is Happening With USCIS: A Quick Rundown
18 May at 4:25 pm
No Comments
Unemployment Benefits’ Impact on Green Card Applicants
5 May at 11:53 am
No Comments
Lo que necesita saber sobre las Restricciones a los Trabajadores Extranjeros
24 Jun at 2:12 pm
No Comments