On November 30th, George H.W. Bush passed away at the age of 94. On this National Day of Mourning for the 41st President, it seems like a good time to reflect on his immigration policy while in the Oval Office. Although he only served one term, Bush’s role in shaping U.S. immigration was anything but minor. 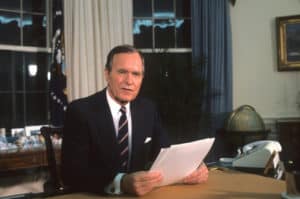 On November 29, 1990, President Bush signed into law what was considered at the time to be the “broadest revision of U.S. immigration laws in more than a half century.” The law, unimaginatively named the Immigration Act of 1990, is for the most part the same law for which our current immigration system is based. Yet, at the time, Bush merely considered the Act to be the next natural step in immigration reform that had begun under Reagan in 1986. While immigration reform under Reagan sought to close the “back door” on illegal immigration, Bush stated that the new Act’s primary purpose was to open the “front door” to legal immigration while providing “needed enforcement authority.”

In total, the Immigration Act of 1990 enabled the admission into the U.S. of “700,000 immigrants in fiscal years 1992 through 1994 and 675,000 a year after that.” This constituted a 45% increase over prior levels of immigration and as of today, there are 8.4 million more Americans in the country then there would have been had the law not been signed.

When you examine all the areas of immigration the Act touched or created, it is easy to see why. The Act provided for family-based immigration visas and created five employment-based visas categorized by occupation, the latter of which is said to be largely responsible for Silicon Valley’s growth, as well as the development of the internet.

The Act also added a diversity visa program that created a lottery to admit a small number of immigrants from “low admittance” countries or countries where their citizens were historically underrepresented in the United States. The only place where the law seemed to cut back, was in its allotment of visas available for extended relatives.

There were also changes with non immigrant visas such as the creation of the temporary protected status visa (TPS). The law authorized the U.S. Attorney General to admit immigrants who “were unable to safely return to their home country because of ongoing armed conflict, an environmental disaster, or other extraordinary and temporary conditions.” Allegedly created specifically to help citizens of El Salvador following a devastating earthquake in 1986, TPS has also been used to help Nicaraguans, Hondurans, Haitians and citizens of other countries. In total, there about 300,000 TPS recipients in the U.S. today. Yet, in the present, El Salvadorians remain the law’s biggest beneficiary.

Through all the change The Immigration Act of 1990 had brought about, its reach was not merely restricted to nonresidents. For permanent residents over the age of fifty-five who had lived in the U.S. for at least 15 years, the Act eliminated the naturalization test, “which had been in effect since passage of the Naturalization Act of 1906.” This essentially meant that anybody who came to the United States, resided here for 15 years, and wanted to Naturalize, but did not know much English, could now Naturalize without taking this rigorous test. You can thank President Bush for that.

Lastly, the 1990 Act eliminated the exclusion of homosexuals under what Congress had then deemed the medically unsound classification of “sexual deviant.” A fact some might find surprising given the President’s complicated relationship with LGBTQ community.

Although President Bush failed to get elected to a second term, he facilitated the passage of immigration reform that is considered by politicians across the aisle to be the gold standard for solving America’s immigration issues. One can only hope that in the not too distant future, an Act inspiring similar praise lead by a President who encourages bipartisanship, could help reform U.S. immigration laws once again.