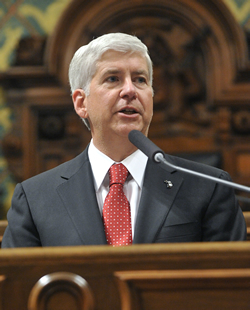 Following the brutal Paris attacks, 26 state governors — including Michigan Governor Rick Snyder — made public statements about refugee resettlement. In light of the security risks, their states have closed their doors to Syrians.

“Michigan officials, along with many other states, are buying into the fear rhetoric that has dictated the Republican stance on immigration. This is exactly the kind of divisive result that Isis aimed to accomplish in Paris. If states begin to close the door to refugees, the losses will be heavily felt in US cities nationwide, especially in those that could economically and socially benefit from an immigrant jumpstart.”

Read more from our opinion piece in The Guardian here.