A Brief History of Illegal Immigration into the U.S. through Canada

The United States shares a 5,525 mile border with Canada, with 13 states bordering on our northern neighbor. This is almost three times the length of the border the U.S. shares with Mexico, which only stretches 1,933 miles. Why is it then that we focus so much on illegal immigration from Mexico? With three times the border length, much of which is not patrolled and covered by forest or water, the Canadian border is porous and easy to cross undetected. Given this knowledge, it seems that immigration from Canada – specifically illegal immigration – would be a more well-known issue. In fact, large numbers of immigrants have used our northern neighbor as a crossing point since the 1800’s. When we think of immigration in the 1800s and 1900s, we think of the black-and-white photos of immigrant crowds holding children and suitcases bundled with twine. The reality is that while the vast majority came through Ellis Island and other similar points of entry, the Canadian border has long been a point of entry for legal and non-legal immigrants alike. 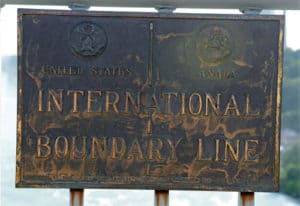 Who exactly was crossing through these Canadian entry points? The National Archives suggest that many of the initial crossers who started entering in the early 1800s were from Russia, Britain and northern Europe. This was due in part to the geographical proximity between Canada and its northern European neighbors which made the long across the long journey across the Atlantic a little bit easier. While geographically Canada was easier to access, it also gained popularity for the ease of access to the United States. The National Archives explains that by the turn of the century, Canada was being advertised as the ideal immigration route to avoid being inspected by U.S. immigration agents. Steamship companies carrying immigrants from the Mediterranean regions began arriving to Canada along with the usual traffic from northern Europe and Russia. Due to less strict inspection requirements and ease of access both on foot and by water, illegal immigration through Canada during those times was more common than one may think.

However, it wasn’t long before the U.S. government caught on, and issued orders to standardize the process for immigrants arriving through Canadian ports. This required the government to  work with steamship and railroad companies, to ensure that immigrants were filling out the same paperwork and following the same processes as those arriving through Ellis Island and other major U.S. ports. Some of these popular ports were Montreal, Quebec, St. John’s and Halifax all of which, could easily be accessed by sea.

Clearly, national records and national opinion tell a very different story. National records of the United State and Canada show the heavy flow of immigration through the Canadian border. However, national opinion does not reflect this reality. Many operate under the misconception that immigration flow comes through our southern border. This may be attributed to our cognitive biases that associate illegal immigration with non white individuals yet, it can also be attributed to national discourse that demonizes our southern neighbors and falsely inflates the issue of illegal immigration from the south. Regardless of what public discourse may tell us, the historical facts show that Canada was indeed a point for many to cross into the United States illegally – just as much as our neighbors from the south. As long as there is a desire to build a better life for one’s family, illegal immigration will continue to exist – regardless of ethnicity, language, skin tone or culture. If we want to confront the issue of illegal immigration head-on, we must first confront the facts. Illegal immigration from Canada has historically played a crucial role in shaping our population demographics and immigration procedure and will continue to play a central role as long as the issue of immigration exists.