A Brief History of Family Detainment in the United States

Recent events at the border, specifically the separation and detention of immigrant and refugee families, have prompted outcry from the American public. Among the sentiments swirling on social media and the news is a common thread, “This is not who we are as a country!” The urge to distance ourselves from these barbaric acts and see ourselves as better than our current state is natural. Is this who we are as a country? Historically, the answer is unfortunately, yes. The United States has a dark and extensive history of separating children and families and stripping them of everything from heritage to basic human rights. This behavior has manifested at multiple points of our nation’s history and with various groups of people. Here, we will explore three of these manifestations – slavery, indigenous boarding schools and Japanese internment camps – and how these dark periods of our history are directly related to the human rights abuses taking place today.

Slavery in the United States started in the 1600’s when the first slaves were brought to the Atlantic shore. Often, families were 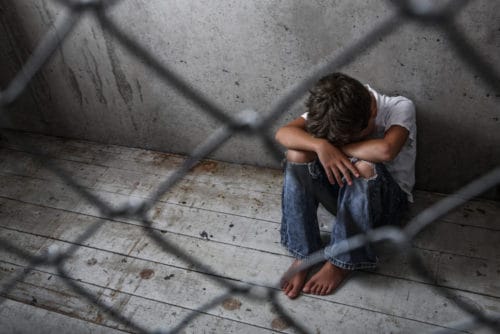 simply separated based on what white slave owners and purchasers desired. Mothers and children were separated and sold to the highest bidder, never to see one another again. Many children were sold away from their parents between the ages of 10 and 13, as soon as they were able to perform manual labor or work in a house. Hundreds of thousands of families were torn apart by white slave owners who had little regard for their relationships, or the mental and emotional toll it would take on the family members who were separated. For many slaves who were abruptly and traumatically separated from their family, they carried those scars with them for the rest of their lives. The separation of families during the era of slavery illustrates the principles that drive the United States treatment of those they consider to be “others”. They display blatant disregard for the rights of people of color and use of familial division as an instrument for punishment and control. Many of these separated children were raised by white families, another common tactic to brainwash these children into Eurocentrism as well as disrupt the cultural, racial and linguistic identities that may have otherwise inspired them to resist their oppressors. This intentional separation of families is one of the longest running in our nation’s history, at least 300 years. While slavery was formally ended in 1863 by the signing of the Emancipation Proclamation, whites continued to find various loopholes around slavery. Involuntary and indentured servitude persisted in many forms well into the 1900’s and even continues today under the guise of mass incarceration. As long as slavery and indentured servitude existed, there were consistently children and families displaced through sale or relocation.

Another instance is the separation of indigenous families and the placement of indigenous children into boarding schools. Some families actively refused to send their children away and were punished by having rations withheld or by armed officers taking the children by force.  In these boarding schools children were disinfected, had their hair shaved off, were threatened with violence for speaking their native language, and suffered abuse from the school wards. Furthermore, the children were forced to adopt European names and practice Christianity. The motto underlying this movement was “Kill the Indian, save the man”. It was widely believed that if colonizers could change the children’s appearance, teach them English, force them into Christianity, eradicate their ties to their heritage and teach them Eurocentric ways of being and navigating the world, the humanity in them could be saved and the “undesirable” indigenous tendencies would disappear. The forced whitewashing of children to fit Euro-centric norms caused incalculable damage to these children and their families. Many of the children who emerged from these homes lost childhood friends to abuse and neglect. Scores of children were brutally beaten, starved or left outside in the harsh elements as punishment. Those who died were buried in mass graves on the properties. Unfortunately, parents could not legally refuse their child’s attendance to a boarding school until the passing of the Indian Child Welfare Act in 1978. However, as whites are wont to do, they found ways around the fact that parents could refuse. Through methods such as withholding rations, coercion, or by sheer force, children continued to be sent to these institutions. While many of the schools closed in the 1900’s, a handful remain open to this day, a sad testament to the dehumanization and displacement of the indigenous at the hands of white officials.

The third instance of family separation were the Japanese internment camps used in the United States following the bombing of Pearl Harbor. The internment of U.S. citizens of Japanese ancestry was justified under the guise of national security. However, reports later characterized these camps as the result of “racial prejudice, war hysteria, and a failure of political leadership” (100th Congress, S.1009). Hundreds of thousands of families were forced from their homes into detainment centers, and were allowed to take only what they could carry. The detainees were assessed on loyalty to the country, such as whether or not they would volunteer for military service, and those who refused were moved to higher security and lower quality camps. Like earlier indigenous schools, these children were educated with the Eurocentric vision of American democracy. This was accomplished with sub-par learning materials and the banning of Japanese language inside the classroom.

What is the common thread that connects all these stories? It all boils down to a colonizer mindset and promotion of narrow Eurocentric ideals, all made possible by destruction of native cultures and communities. White authorities have long made a practice of dehumanizing, detaining and displacing families and communities. What we see happening now at the border is practiced under the guise of ‘national security’ and preventing the entrance of ‘illegal immigrants’. Today’s events have their parallels throughout our history. We as a country must overcome our own racist past and hold ourselves accountable for our harmful ideologies and rhetoric. Otherwise, we will be doomed to enact the same dehumanizing practices over and over again.

On slavery and its continuation as mass incarceration: