We’ve all heard the myth of “anchor babies,” an offensive term for the fabrication that heavily pregnant women come to the United States to have their babies here, automatically making that baby a U.S. citizen. It is also implied or assumed that the mother will gain some sort of immigration or citizenship benefits from having a U.S. born child. This myth is not only untrue, it has been thoroughly debunked by various sources. 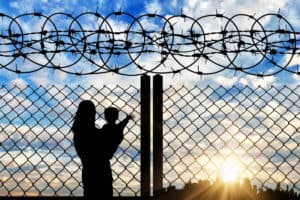 Let’s examine what underlies this entire argument, the 14th Amendment. The 14th Amendment, in short, states that, “All persons born or naturalized in the United States, and subject to the jurisdiction thereof, are citizens of the United States and of the state wherein they reside.” This does guarantee the child U.S. citizenship, so that part of the myth is true. Although there has been debate over this specific situation in the past, a child born to illegal immigrants on U.S. soil will be given a U.S. birth certificate, making him or her a legal citizen. But there also seems to be a misconception that by default, the mother will gain some sort of citizenship benefit as well. On the contrary, the mother will continue to live as an undocumented immigrant, putting her at risk for being caught and deported.

In fact, the concept of an “anchor baby” is an inherently dangerous one. This is why it is a myth and not a common occurrence, as we may have been lead to believe. For a mother, it would be extremely risky to come to the United States as an undocumented immigrant to have a child here. One of the biggest hurdles would be actually travelling to the United States  which in itself is highly unlikely for someone who did not have the financial means while pregnant. It also would give the mother no citizenship benefits whatsoever. The child would not be able to petition for her citizenship until they are 21 years of age. For those 21 years, the mother will be forced to continue living as an undocumented immigrant and as a result, could be removed from her child at any time. For mothers who are lucky enough to have a family member or spouse here to petition for their citizenship, they will not have to endure 21 years of anxiety. These mothers however, get a bad reputation for taking advantage of the system and the 14th Amendment. As we’ve explained here, the mother who does not have these advantages, receives absolutely no benefits whatsoever. In fact, her condition would likely remain the same or even worsen as she will likely be plagued with anxiety over being separated from her child and will struggle to find employment, use social services, and adapt to the language and culture of the United States.

We’ve just established that there are inherently more risks than benefits to having an anchor baby in the United States, so why does this myth continue to persist? This myth is tied to a larger perpetuated myth that immigrants burden our social services – a myth we’ve all heard in some way, shape or form. They come for medical treatments and to give birth to their children, and then continue to leech off the system in the form of jobs, welfare, and more. The larger myth of immigrants leeching off of social services would take an entire essay to dispel, as it is complex and steeped in misinformation. The myth and offensiveness of “anchor babies” is a small part of a larger culture of misinformation around immigration and immigration services. Again, this ties into a larger culture of narratives created and pushed by those who have no experience whatsoever with navigating the immigration system.