A Brief Look at the Chinese and Japanese Exclusion Acts 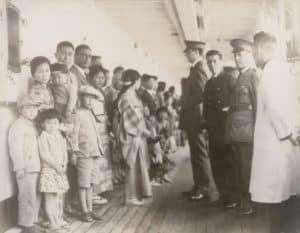 During the California Gold Rush of the 1850’s, millions of individuals converged from around the world, leading to massive amounts of immigration, the resurgence of the American economy, and conflict.  Arguably, the bulk of the immigrants that endured the most conflict at this time were the Chinese and Japanese. These Chinese and Japanese immigrants came to America from what were then third world countries, seeking better opportunities for themselves and their families.  That opportunity was gold and the ability to contribute to a free, fast growing economy. However, their efforts were far from free of struggles with racism, hardship and xenophobia.

Chinese and Japanese immigrants, when given the opportunity, flourished under the American economy.  Not only were they hired for cheaper wages, compared to white, native born American citizens, but their work ethic and knowledge surpassed anything seen before.  The labor of Chinese and Japanese workers contributed significantly to the American economy, especially in the areas of industry and agriculture.

For example, Chinese immigrants played an outsized role in the construction of the first transcontinental railway system in California.  Additionally, while Japanese immigrant farmers controlled a proportionally small 450,000 acres of land in California, 10% of those crops accounted for $67 million of the state’s total value.

It is commonly argued among historians that the so called “American Dream”, a model that immigrants to this day look up to, was born under the immense economic success Chinese and Japanese immigrants experienced in the late nineteenth and early twentieth centuries. However, many white native-born Americans that were working alongside them, felt heavily intimidated.  Competition for jobs had increased as Asian immigrants were working more efficiently and for lower wages compared to the average white American worker. White Americans were looking for the same opportunities that Chinese and Japanese immigrants sought in the American West, yet the difference was that immigrants were highly valued prospects. It was soon afterwards that racist anti-immigration movements began to take root.

The first and easiest group to target were the Chinese immigrants.  China did not do much to keep their immigrants safe from prejudice and abuse in America, due to its weakened state and ongoing domestic issues. As a result, assaults and murders against them were fairly common.  Furthering their resent towards the Chinese, white workers led a powerful movement in the 1870’s with a slogan reading “The Chinese Must Go!” Shortly afterwards, many politicians would go on to support their white constituent’s yells, which culminated with the signing of the Chinese Exclusion Act in 1882 by President Chester A. Arthur.  The Act completely barred Chinese immigrants from entering the country and represented the first major law restricting immigration to the U.S. as well as the first to discriminate on the basis of race.

In contrast, anti-Japanese movements had a much more difficult time gaining traction largely due to Japan’s rise from its third world country status into a hegemony in Asia. This in turn, allowed it to take a more active and consistent approach in negotiating with the U.S. about the treatment of their people.

Japanese immigrants had strung along so far into American society that by the time twentieth century had begun, some members of Congress actually wanted to make naturalization color-blind.  Nonetheless, the existing organized opposition from the previous anti-Chinese movement made such circumstances impossible. Cases heard by the Supreme Court such as Ozawa v. U.S. and Yamashita v. Hinkle set a precedent among even the most educated and successful Japanese immigrants that they could never obtain the citizenship they desired, join the profession they studied hard for, and own the land they dreamed of because of their race.

In addition, to further appease the anti-Japanese movement, President Theodore Roosevelt slowed down immigration from Japan through the Gentlemen’s Agreement.  It kept the public stable for some time, but it wasn’t until the 1920s where the racist movement had picked up at a tenfold, due to a period of intense nationalism which saw an increase in opposition and violence against Japanese immigrants. Later, President Woodrow Wilson signed the Immigration Act of 1924, which essentially achieved the same outcome as a Japanese Exclusion Act.

Neither the Chinese Exclusion Act nor the Immigration Act of 1924 arose out of thin air. Fear was a common element found in both cases among opposition groups towards Chinese and Japanese immigrants.  In this context, white American workers pursuing economic opportunities in the West were frustrated when outcompeted by their hard working immigrant counterparts. These frustrations coupled with the fears of changing demographics, morphed into racism which in turn, molded itself into a movement calling for prohibitive and racist immigration policies.

In both situations, politicians ultimately yielded to the racist intentions and fears of their white constituents.  Ironically, some of these politicians even preferred hiring Chinese and Japanese immigrants because of their cheap, proficient work.  Yet, three different Presidents, in three different eras, casted strict immigration policies on Chinese and Japanese immigrants who had done nothing expect contribute to a substantial improvement of the U.S. economy, especially in the American West.

An influx of people with differences in appearance, language, religion, and culture has historically ignited irrational fears in many Americans.  It is when that fear manifests itself into racism and xenophobia and then makes its way into the political arena, that dangerous precedents are set which can take years or decades to reverse.  Mistakes such as those made with the Chinese and Japanese immigrants in the late 19th to early 20th century are never worth repeating. Hence the emphasis on recalling our nation’s history, to prevent the repetition of such dangerous cycles.

Unfortunately, in today’s political climate that cycle has proven resilient and evolved over a hundred years later.  Under the Trump administration that same fear and racism is more evident than ever among the U.S.’s citizens and politicians. Only today, it is immigrants from Latin American and Middle Eastern countries carry the same negative stigmas that Chinese and Japanese immigrants did in the past, in spite of their contributions to American society.

However, as protests around the country (and the world) have demonstrated, the Trump administration does not represent the nation’s collective voice on issues of immigration and humanitarian policy.  Together with open arms, this country can change such negative implications and create a precedent that breaks the stubborn cycle of our racist history. President Trump will not be in office forever.  Change is on the horizon and immigrants will be leading the way.